Warner Grand Theatre and the MSO

The Milwaukee Symphony Orchestra and their architect, Kahler Slater, had a challenge: The MSO’s dream of converting the magnificent art deco Warner Grand Theatre into their new home was finally coming together. They wanted to show off the space to the public, and new or potential funders, but decades of being vacant meant the theater wasn’t safe for the general public.

The surest way to show funders the potential would be to have them experience the space for themselves. But getting them to make the time and effort, plus jump through the safety and legal hoops to visit in person was difficult. Photos and video helped but had a fraction of the impact of being there.

Then Kahler Slater had an idea. What if people could visit virtually. And not just a 360 virtual tour on a computer, but an immersive VR headset experience? That is were Tour de Force 360VR came in!

Shooting the space was a challenge. Much of the lighting and electrical system no longer functioned. A team from Kahler Slater, lead by project architect Chris Ludwig, and Tour de Force 360VR brought in our own lighting and hundreds of feet of extension cord to bring the massive interior to life and accent some of its best architectural elements. After applying our High Dynamic Range imaging methods you could actually see more detail through our images than in person with your naked eye.

The VR experience premiered during Night Market, a festival/street market where Wisconsin Avenue is shut to traffic and thousands of people enjoy an evening of events, food, and shopping. Kahler Slater set up an event space outside the theater’s entrance where people could learn about the MSO’s plans and explore the interior virtually. “Oh wow. I’ve never seen anything like this,” was a common reaction. Experience that in the 360 video at left.

But perhaps the biggest impact came with bringing current and potential funders and other interested parties to the theater…virtually, in their offices or homes, no matter the time or where they were.

If you can, check out the tour using a web browser in a VR headset — anything from a simple Google Cardboard, Daydream or Gear VR player using a phone to more advanced headsets from Oculus, HTC and others. Or, using a phone or tablet, click the gyro button turning your device into a virtual window. Move it around to look anywhere.

Lest We Forget — a 360VR Virtual Concert Experience

A concert is an event to be experienced. If it weren’t wouldn’t everyone just watch a convenient video or listen to a recording? Still photos can capture select moments and views. Video can show every moment and movement of a performance in its entirety. But to convey the look and feel of actually being there? 360VR does that best. It allows viewers to take control of the experience looking where they want when they want for as long as they want — just as if they were there in person, putting it all into context. All three media combined give the best of all worlds, of course, drawing on the strength of each.

If the experience of some place or event is a big part of its draw 360VR can be your best, most persuasive tool to convey that. 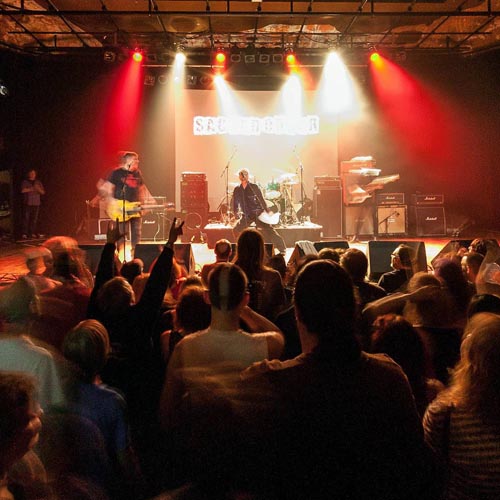 What about 360 video, you may wonder. That offers some exciting possibilities. The downsides are high bandwidth demand, computer power needed and lower image quality. In real-world terms, the viewer is often limited to a significantly smaller, lower resolution experience than is possible with still 360VR. Of course, that trade-off will diminish over time as internet speeds, computer power, and 360 video camera capabilities increase. More importantly (to me) is that only recently has 360 video capture been possible in what I would call professional quality (sufficient resolution and without obvious stitching errors). We look forward to offering it in the near future.

Posted in Tourism, Historic and Cultural Sites | No Comments »

Experience the mass protest rallies in Madison heard around the world.

If you ever wondered about the power of 360VR to convey the experience of a place or event, check out this Tour de Force of the protest rallies in Madison, Wisconsin that took place in February and March of 2011.

Still photos and video of the rallies where everywhere. They showed what was happening (mass protests against a bill from Governor Scott Walker and the Republican led legislature that would strip public unions of collective bargaining rights). But viewers remained outside observers. There was little sense of what it was like to actually be there. The experience and passion that participants shared ends up being a critical part of the story. It is simply missing in other media. 360VR lets viewers step into the image and experience the events for themselves.

END_OF_DOCUMENT_TOKEN_TO_BE_REPLACED

The guided tour is a company’s highest value form of marketing, the one they are willing to spend the most per person because the results justify it. But by its very nature the number of people that can be reached is limited, by cost, by time, by capacity, by distance… until now. With our unique guided virtual tour you can reach prospective and current customers 24/7/365 anywhere on the globe. The results speak for themselves. (See below.)

The center of Frank Lloyd Wright’s world was Taliesin East near Spring Green, Wisconsin. It was his home, workshop, architectural laboratory and inspiration for nearly all his life. Our international award winning Tour de Force, allows visitors from around the world to experience this place in ways only a personal visit could provide before. The response has been dramatic.

A Guided Tour where you are in control: This virtual visit introduces our powerful guided tour capability which is unique in the industry. If they want, visitors can sit back and be lead on the tour by a guide directing their attention to various aspects of a location, even augmenting the presentation with still images (or any media) to illustrate points. This is much like a physical tour or narrative video. Unlike either visitors are in control. They can move around to locations and topics of interest to them in any order they want. They can always drop out of the guided tour to explore on their own and “rejoin” the tour at any point. This becomes highly interactive and engaging and is proving quite intuitive. Try it out.

END_OF_DOCUMENT_TOKEN_TO_BE_REPLACED

Immersive images are all about experiencing a place, and a fireworks display is definitely an experience! A Tour de Force brings it to life virtually. Bursts in front and behind you. Reflections in the water and windows. Bursts light up the crowd below. And don’t forget the sound. (Turn up your speakers.)

Still images can capture beautiful moments. Video can show events over time. But both are passive and singularly focused. The viewer remains an outsider. To experience an event or place–to get a sense of actually being there–you need to be in control, looking where and when you wish, seeing everything in context. Animating action and adding sound heighten the realism significantly.

A Tour de Force 360VR is unique in its ability to bring it all together, to actively engage the viewer. It is the next best thing to being there. You get the “best seat in the house” without battling massive crowds or worrying about the weather or parking. And of course that experience is available 24/7 worldwide.

Now ask yourself, does viewing this make you want to experience it in person more or less? Almost nobody will say less. Tour de Force 360VR is a very effective way to market as well as share.

Warning: With all the surrounding action this Tour de Force will really challenge some computers. If you are unsure try the SD (standard definition) version first. It could also take some seconds for the fireworks to appear. Fast computers with fast internet connections should have no problem, including in full screen.

This is a basic facility tour of the Milwaukee Public Market. It demonstrates:

This virtual tour represents our most basic production level. Still the highest quality HDR images but with a minimal interface: windowed plus full screen options with simple thumbnail navigation. Notice the greater impact full screen offers. Greater impact = greater results. Even franchise hotels have the option to produce their own, individual websites. Our full screen 360VR tour modules are easily added to your new or existing site. The interface and features can be set up any way you like.

A 2016 study by Google found that when hotels offered  a 360 virtual tour it doubled web visitors’ interest in booking a room there. If you want the best results we would be thrilled to help. 414.345.9660

Posted in Architecture and Interior Design, Hotels and Resorts | 3 Comments »